Being in a prolonged slump at the start of your season is now how Ben Crane wanted to start out. With everything from back pains to swing changes, Crane wondered if, and when, he would get his game back.

With a first- round 63, followed up by a second round 65, he now has a six-shot lead in the weather delayed FedEx Saint Jude Classic. Carl Petterson and Jason Bohn, the closest pursuers to Crane, still have one and two holes left in their second round.

Second in the field in strokes gained-putting, with an average 4.186 strokes gained per round, Crane started off Fridays round with a 44-foot putt for birdie. His first bogey didn’t even come until the 36th hole. Hitting 23 of 36 greens in regulation helped him out as well. 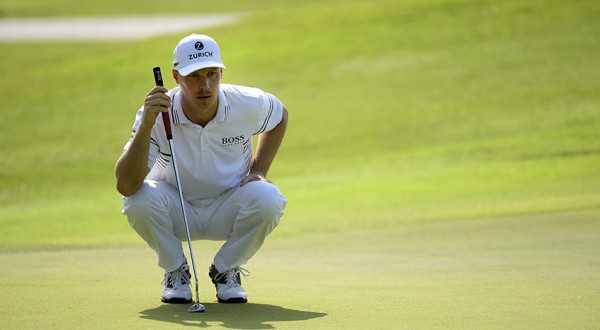 “I certainly didn’t expect to be here,” said Crane, whose 150th in the FedEx Cup. “If someone would have told me a couple days ago I’d be standing in front of a bunch of cameras, I would have asked, ‘What did I do?’.

“It’s been a really, really hard year. …You start wondering, ‘Am I going to get it back?’ ”

Ben Crane has had only one top-10 this season which came back at the Humana Challenge, but he had to receive some on-course treatment during the tournament for his back pain. This was the event that convinced him he needed a swing change to compensate for the pain.

He’s a four-time winner on tour, with his last win being at the McGladrey Classic in 2011, also a trying year for Crane.

“This feels very similar to McGladrey, just having similar conversations with God and my wife and my caddie, … knowing that I’m OK without golf and that this is fun and I love it, but I don’t want to love it too much,”