JPGA Local results from the past weekend! 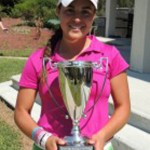 The Hurricane Junior Golf Tour (HJGT) traveled to Cimarrone Golf Club on March 14-15 for the Jacksonville Junior Shootout. Top three winners in all divisions received an invitation to the 2015 Mid-Season Invitational. Winners from each age division received an exemption to the 2015 HJGT National Championship.  All divisions were ranked by the Junior Golf Scoreboard. Additionally, the top ten finishers in each division received points towards year-end honors which include state teams, ALL HJGT teams and the Hurricane Cup. The top finisher in the Boys 15-18 division received four AJGA Performance Stars and the top five received one Performance Star. The top finisher in the Girls 15-18 division received four AJGA Performance Stars and the top three received one Performance Star. The top finisher in the Girls 11-14 and the Boys 11-14 division received one AJGA Performance Star each.
In the Girls 15-18 division, Isidora Nilsson who attends the JPGA, and is committed to the University of South Carolina, had a strong two rounds posting a two-day total of 147 (+3). Nilsson played a great round and birdied seven of her first 18 holes, shooting a 72 (E). Heading into the second round there was strong play throughout the division. Nilsson continued her strong play on day two, shooting a 75 (+3). Jennifer Zhou of Longwood, Florida shot 73 (+1), improving from her round one score of 77 (+5) by four strokes. Zhou shot par or better on 16 of 18 holes to help her achieve second place. Ami Gianchandani of Short Hills, New Jersey took home third place with a two-day total of 151.
In the Boys 15-18 division we had consistent play from the beginning on Saturday. Amadeo Figus of Port St. Lucie, Florida lead the way shooting a 73 (+1). Figus carded four birdies on his 18 holes, and also bogeyed four times. Heading into the second round, strong play continued for Figus. Figus pared or better 16 of his 18 holes shooting a 70 (-2) to earn first place and take home the trophy with a two-day total of 143. Mozingo fought hard to narrow the gap, shooting the clubhouse low of 69 (-3), a 145 total, but it was not enough to knock out Figus. There was a tie for third place between Brett Loy and Mark Goodall who attends the JPGA, both shot a total of 152. All in all, great play from the Boys 15-18 division.