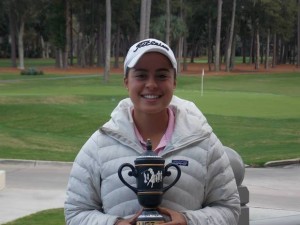 Despite opening the second round five strokes off the lead, Isi Quevedo, a student at Hilton Head Island’s Junior Players Golf Academy, won the Girls Division of the International Junior Golf Academy Invitational this past weekend at Sea Pines Resort.

Quevedo, 17, shot a 1-over-par 73 in the first round at the Ocean Course, closing with three birdies on the back nine.

She opened her final round at Harbour Town with a birdie on No. 1 and another on the par-5 fifth as part of an up-and-down 39 on the front nine and trailed by three strokes at the turn.

Quevedo, a native of Santiago, Chile, began to make her move with a birdie on No. 11 and another at the tough par-3 14th. She bogeyed No. 15 but finished with three straight pars in gusty conditions for a second straight 73, good enough for a two-stroke victory.

“I knew the scoring wouldn’t be too good since it was a hard golf course,” Quevedo said. “I played aggressively, but when I didn’t have to, I played smart.”

Earlier this year, Quevedo finished third in two other IJGT events — the Lowcountry Open at Oldfield County Club and the Georgia Open at Savannah Quarters Country Club. She is ranked fifth among girls on the tour.