Trace Crowe has lived in Bluffton for less than six months, and he’s already bringing some serious hardware to the Lowcountry.

“That’s pretty sweet, man, pretty cool. The names on there are pretty good,” Crowe said of the award. 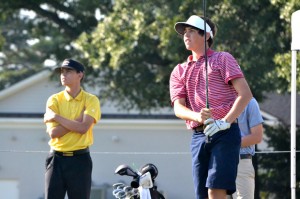 The Player of the Year is awarded to the player in first place in the Heritage Classic Foundation rankings at the end of the season. Crowe beat Bluffton’s Bryson Nimmer, also a junior at HHCA, 1,617.50 to 1,497.83.

Crowe moved in July from Easley, where he helped lead the Green Wave to a 2012 Class 4-A state championship, finishing second individually. The decision to come to the Lowcountry was based partially on golf and partially on family. But the benefits for a young golfer are hard to deny.

“There are a lot more connections you can make, and you get to play better courses,” Crowe said. “And the weather is pretty good too, so that helps.”

Crowe soon enrolled in HHCA and the JPGA. He hasn’t teed off yet for the Eagles, but he gives the JPGA a lot of credit for his improvement this fall.

“It’s a decision I made when I moved down here. I had an opportunity to go a

nd it’s really helped,” Crowe said. “They help you with fitness and preparing yourself every day. It’s about trying to get better every day and not wasting time.”

“He obviously comes to the area with a lot of game,” JPGA lead golf and fitness instructor Chris Trembley said. “He’s the top-ranked junior in the state right now. He’s got a well-rounded game, but there are certain things we’re working on to tighten him up. He’s still young, still growing.”

Trembley said, “distance is definitely an asset” for Crowe, but his short game is solid, as well.

“It’s just a question of him continuing to get out there and expose himself to tournaments and a higher level of play,” Trembley said.

Crowe has certainly excelled against the level of competition he’s faced so far.

Crowe has committed to play for Auburn University after his 2015 graduation from HHCA. But before that happens, he has another summer of junior golf and two seasons ahead with the Eagles.

“(His addition) is huge in a variety of ways,” HHCA golf coach Doug Langhals said. “He’s a very good golfer. But the great thing about Trace is he’s already close with a lot of the kids on the team through tournaments. He should fit right in, as far as chemistry goes.”

Langhals said Crowe will help fill the leadership void created with the graduation of JD Lehman, now at Louisville. And he should create a formidable 1-2 punch for the Eagles along with fellow junior and Clemson commitment Nimmer.

“With Trace specifically, he has a great enjoyment of golf,” Langhals said. “When he’s out playing, he just enjoys golf. He’s a good player, but you see a lot of good players that look miserable. And in that respect, he fits in well here.”