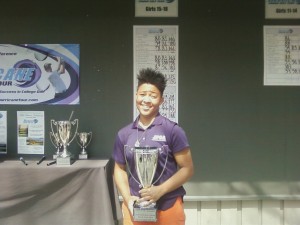 Winning her fourth HJGT tournament of the year in as many starts was Anita Uwadia of the Junior Players Golf Acdemy. She battled very gusty conditions but still managed to post consistent rounds of 77 and 76. Uwadia had five birdies over the course of the tournament including posting birdies on hole nine during both rounds. She also had the most pars in the division at 21, which proved to be the difference maker in winning the girls 15-18 girls division. Uwadia finished the weekend with a total score of 153. Improving drastically to capture second place was Isidora Quevedo also with the Junior Players Golf Academy. She made many smart adjustments to better her first round score of 83 by ten strokes during round two. Quevedo was able to turn her tournament around on the front nine on Sunday. During round one, her front nine included six bogies and during the round two front nine she fired five birdies, including three in a row at one stretch. Quevedo finished the weekend with a total score of 156. Amy Ding of Lexington, MA posted rounds of 78 and 83 to finish third.