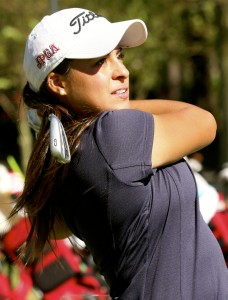 Congratulations to JPGA Student Isi Quevedo on Winning the AJGA Preseason at Savannah Quaters.
Conducted by the American Junior Golf Association, the Preseason Junior at Savannah Quarters was a 36-hole stroke play competition played on the par-72 course at Savannah Quarters Country Club. The event featured 63 boys and 21 girls, ages 12-18, from 14 states and nine countries. The Boys Division played the course at 6,636 yards par 72 while the Girls Division played the course at 5,746 yards par 72.
Competing in her third AJGA event and Playing in the final group, Quevedo earned her first AJGA victory with a final-round even-par 72 to get her to a tournament total of 1-over-par 145 and a 9 shot victory.
“Today I played well, I hit a lot of greens, and my misses were on the green. I always gave myself a chance for birdie,” Quevedo said.
JUNIOR PLAYERS GOLF ACADEMY