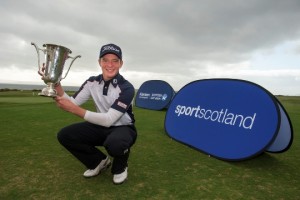 Becoming the first player since Steven O’Hara in… 1998 to hold the two titles at the same time, the 17-year-old top seed claimed a 6&5 success against his fellow Boys international team-mate Ben Kinsley, also 17, in the SGU’s flagship under-18 event.

Ferguson, who became the first Scot in almost 10 years to win the Boys’ Amateur title at Hoylake last year, was never behind in the match that featured a trio of chip-in’s. A great way to end a long week of 9 matches.