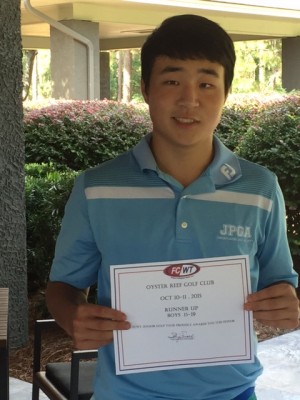 On Saturday JPGA, Junior Players Golf Academy student Bu Min Choi of South Korea fired an opening round of 3 under par 69 to take the lead in the Boys division of the FCWT Junior Golf Tournament at Oyster Reef.  Choi played his final 6 holes at 2 under par and led Nicholas Russell of Hilton Head, SC by two shots. Russell, the only other junior golfer to post a sub-par round on Saturday, began Sunday’s final round in 2nd place. Russell and Choi were paired together for the final round and played their first 3 holes the same (4-6-3).  Then on hole #4, a 364-yard par 4, Choi made a birdie, while Russell made a double bogey 6.  Russell quickly rebounded and made a par on the 5th hole.  He then made a birdie on #6, followed by a par on #7 and made another birdie on #8, while Choi gave one back to the course on #8 with a bogey 5.  Russell was on 38 (+2) at the turn and Choi was at 37.  Both junior golfers made par on #10, then Choi made a birdie on 11.  Both made birdie on #12, but when Choi made bogey on 13 and Russell made birdie, things were beginning to change.  Russell then put up 4 pars in a row on 14-17, while Choi gave another one back to the course with a bogey on #16.  Russell was one shot back of Choi on the 18th tee, and finished strong with a birdie to Choi’s par which forced a playoff.  Russell played his back nine at 3 under par 33. Choi was even par on his back nine.  Russell carried his back nine momentum into the playoff and won the title on the first playoff hole.  Choi finished in 2nd place followed by Walker Campbell of Hilton Head, SC who fired a final round of one-under-par.  Choi and Russell both had 8 birdies for the tournament. 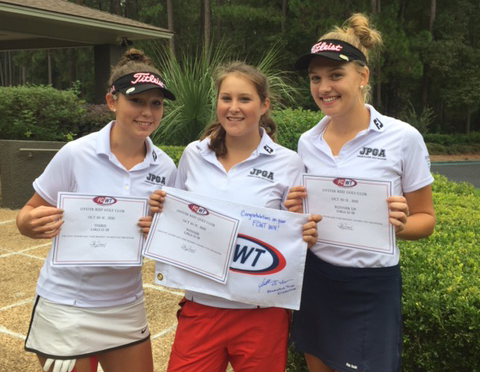