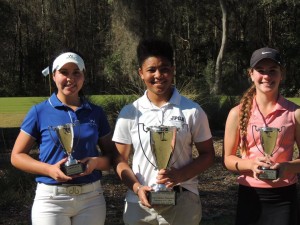 Anita Uwadia of the Junior Players Golf Academy located on Hilton Head Island, SC won the Girls 15-18 division after trailing by two strokes going into the final round. Uwadia birdied holes 12 and 18 on Saturday, and finished with a first round score of 73. Uwadia made two birdies again on Sunday, but more impressively carded two eagles on holes 12 and 18. Uwadia’s lowest round came on Monday after shooting even par. Her three day total was 217 and a 2 stroke victory. With this win, Uwadia has now made it three starts with three victories on the year. Ariadna Fonseca of Apopka, Florida went back and forth with Uwadia, and finished the tournament in second place with a three day total of 219. Fonseca birdied the 18th hole on Saturday to opening the tournament with a score of 76. Fonseca fired a round score of 68 after five birdies on Sunday. Three of those birdies came on her Sunday back nine. Fonseca fired a strong 75 on Monday after making four birdies. Lauren Waidner of Fleming Island, Florida finished in third place after a total score of 228. Waidner’s first two rounds were in the 70’s with scores of 73 and 75, respectfully. She carded five birdies in her first two rounds at Fleming Island.