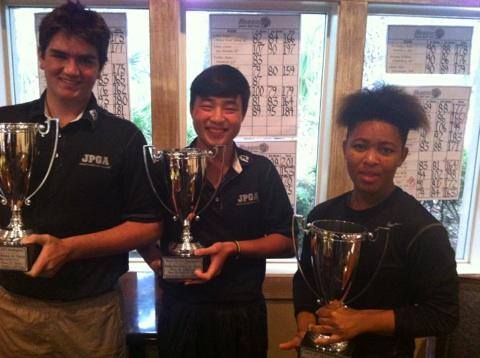 This week the Hurricane Junior Golf Tour visited Hilton Head Island, South Carolina. Despite the island’s usually warm climate, this weekend threw a bit of rain and wind our way. The first day was cold in the morning but warmed up in the afternoon. With the wind blowing at a steady 20 MPH most of the day, conditions were not ideal. Day two presented even more horrendous conditions, rain was the headline during round two and did not stop until after the entire field finished. The course was borderline unplayable due to the amount of rain, but it was ultimately decided that play would resume no matter what. Per usual, the fifty-eight-player field in the older boys division was competing for Junior Golf Scoreboard Rankings, a bid into the Tour Championship and points contributing to year-end honors for various state and HJGT teams.

In the Boys Division, JPGA student Rowan Foxley out of the great state of Washington would be crowned this weekend’s champion with a two-day total of 154 (+14). It is no surprise that Mr. Foxley had no problem adapting to the 2nd round damp conditions. For competitors from Washington, playing in the rain is no foreign task. This showed in his play today as he shaved three shots off his round. He was one of two gentlemen to shoot the low round of the day, 75 (+5). It was a true grind for Foxley, but he showed a great amount of courage and willpower. I am sure we will hear more about this young man in upcoming events. Coming in second place out of Longs, South Carolina is Daniel Graves. Graves thrived in the wind on day one shooting a solid 75 (+5). He was at the top of the leaderboard at the conclusion of the first round.

In the Boys 11 – 14 Division, JPGA student Bumin Choi out of Gyeonggi-do, South Korea brought home the gold with a two-day total of 153 (+13). Choi handled the breezy conditions of day one a little bit better than the wet conditions from day two. During the first day of play, Choi was able to hit more quality shots and make more putts without the rain beating down. He danced his way to a round one 75 (+5) and a six shot lead over Hunter Layne. On Sundays round, the saturation of his clothes and the golf course made for a much more interesting day. It was tough and grueling, but Choi was able to make some birdies and earn first place honors. Placing in second out of St. Augustine, Florida was Hunter Layne with a two-day total of (+25).

In the Girls Division, local wonder Anita Uwadia another JPGA student was declared the winner of the Palmetto Dunes Jr. Open with a two-day total of 163 (+23). Carding a birdie and many pars during day one of play, she concluded round one with a graceful 79 (+9). Uwadia had a four shot lead going into the second round, providing her with a little cushion and room for mistakes. Apparently this was just the amount of room she needed, as she narrowly escaped with a one shot victory. Her round two finish almost did her in, but she persevered under the tough conditions and pulled out a win for the home team. Coming in second place with a two-day total of 164 (+24) is Kayla Kozak out of Bluffton, South Carolina.