Isi Nilsson and JD Moore on Signing for Golf Scholarships!

Congratulations to JPGA Students Isi Nilsson and JD Moore, who with hard work, dedication to the great sport of golf,  and the help of the Coaching staff at the Junior Players Golf Academy, have both signed letters of intent for Division 1 Golf Scholarships on  November 13th 2014 for the fall of 2015. 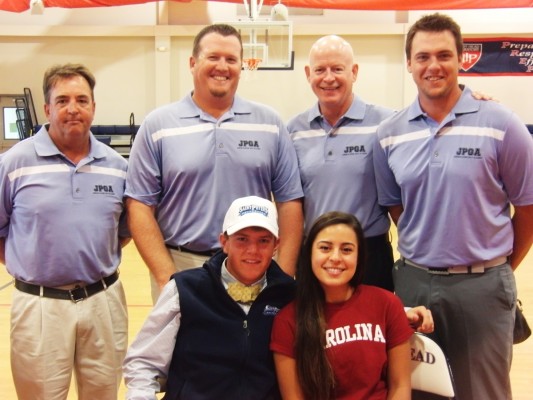 Isi is from Santiago, Chile and started playing golf in 2005. Isi arrived at the JPGA in 2010 shooting in the high 90’s Low 100’s. Isi has been one of the hardest working and most dedicated student to attend the JPGA to date. Isi has won over a dozen junior events since arriving with a low personal tournament best score of 68 and 2 round total of 6 under par. She has a Golf-week junior ranking of 54 with her being ranked 23rd in the graduating class of 2015. Isi will be playing her college golf next year for the #1 ranked team in the country the University of South Carolina Gamecocks.

Congratulations Isi we are so very proud of what you have accomplished in the time with us at the JPGA, and thank you for letting us be a part of your journey.

JD Moore had been playing golf for less than a year before arriving at the Junior Players Golf Academy in January of 2012. JD’s first competitive rounds were 2 weeks after arriving where he shot 112-110. JD worked very hard in his first year and has done so every year since, and with the help of our Low student to teacher ratio returned to the same tournament in 2013 to shoot 78-81 a 63 shot turn around in 1 year at the JPGA. With his continued dedication and help from the coaching staff he now has a low round of 71 and a Division 1 scholarship to St Peters University in NJ, home of the Peacocks for the fall of 2015.

We all wish you the best in your college career and thank you for choosing the JPGA for the last 3 years. We look forward to watching your progress in college.